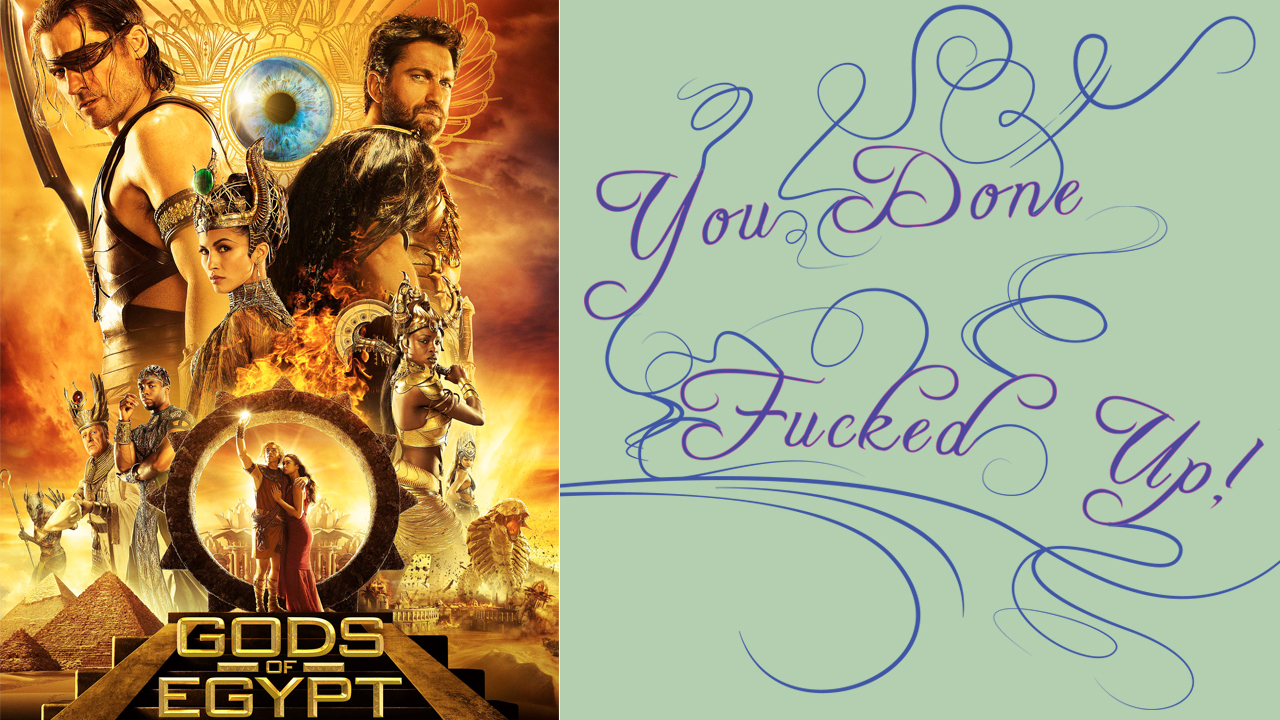 Gods of Egypt has been a problem since the final casting was announced and people started petitions against it. And yet Lionsgate Films and the director chose to ignore people’s upset over a whitewashed Ancient Egypt pantheon of gods. And now their movie is a big, fat financial bomb.

When reviewers got ahold of this movie they tore it to shreds. It has a 13% score on Rotten Tomatoes (up from 10% a couple of days ago. Progress!). Everyone with sense is saying this movie is not funny haha cult following bad, it’s horrendous.

Charlie Jane Anders’ review on io9 is titled “Murder Is Legal and Torture Is Mandatory, Because Gods of Egypt Exists” and opens thusly:

The moment I walked out of a screening of Gods of Egypt, I set about building a massive throne out of human pelvises. I worked feverishly through the night, barely pausing to listen to the sounds of the city fracturing into seven brutal revels: a chainsaw maze, a great pit full of vengeful lobsters, a poisoned rave, and so on. As I climbed at last atop my pelvic majesty, I had a perfect view of the inundation of viscera that had turned the very streets into canals: For even if nobody else ever saw this movie, its very existence was enough to sunder every human relation for once and ever. There could be no language, no society, no kindness, after Gods of Egypt.

How did this happen? Why didn’t somebody involved with the creation of Gods of Egypt realize what they were setting in motion, and that this movie was not just bad, but obscenely, devastatingly bad?

There are so many wonderfully funny bits in this review that I can’t quote them all. Here are a few more, but read the whole thing, please:

Gods of Egypt has been justly criticized for its policy of casting white people as almost all of its Egyptian characters—to the point where it might be the first movie whose director apologized months before it was released. But the casting is just one of the many problems that eat away at this movie, which seems to have fed slices of Egyptian cultural traditions into a typical Hollywood “Save the Cat Goddess” structure, to try and create something familiar and comfort-foody, with an exotic veneer.

…loosely based on Egyptian mythology, if the Egyptian gods were mostly white people who could turn into animal robots, sort of like Transformers.

…every few minutes, the movie asks us to care about stakes-raising weird ideas like …“Set has stolen the glowing blue brain of the only black person in the movie!”

…you don’t get the impression that any of the human characters actually worships these gods or considers them more than just oversized people with random powers.

But for the most part, Gods of Egypt feels like such an abdication of story, and such a bastardization of culture, that the only sane response is to abandon sanity, and enlist in the murder-police of the senseless new era.

Some other reviewers also mentioned the whitewashing thing, but didn’t make it a central part of their review. Not like Scott Woods, who just went in with “Gods of Egypt is the most racist film ever“:

For the record, I’m going to spoil the shit out of this movie because a) you have no business seeing it even for free, and b) fuck this movie.

Here’s how Gods of Egypt beat the high score:

When you do something wrong and you don’t know any better, that’s a crime of ignorance. You don’t know or understand the ramifications of what you’re doing, or you’re too stupid to see how what you’re doing is wrong. Matchbox Twenty singer Rob Thomas joking that he drinks until he becomes a “black Australian” is a racist act borne out of his ignorance. He says he didn’t know about the history and politics of the association, fine, you’re ignorant (and racist). The KKK, on the other hand, is willfully ignorant. It is not a group of blissfully unknowing individuals. There is nothing accidental about their racism. They know that the things they do are uninformed and illegal and wrong. They just don’t care.

And he’s not wrong. The director knew from jump what he intended to do. Perhaps he got a little worried at one point and called up Ridley Scott, who was in the final stages of filming another racist whitewashed epic set in Egypt, and asked “Should I abandon the idea of casting white people as leads in my movie?” and Scott probably said to him, “Nah, son. You can’t mount a film with that budget and say that your lead actor is Mohammad so-and-so from such-and-such.1”

You need to go read all of Scott Woods’ review/essay as well, as he breaks down all the reasons why the racism, the whitewashing, and even the token casting of one brown dude is a huge and serious problem2.

All of this is enough, really, to condemn Gods of Egypt for all time. And so I feel silly even mentioning this. But… it makes me mad that this movie messes up Egyptian mythology so badly.

Not even on the I’m Black And Ancient Egypt Is My Heritage level3. As a person who has studied mythology and other aspects of a few ancient cultures, it fills me with rage when media properties treat mythologies as interchangeable. The first time I saw the trailer for this trasheap of a movie, my second thought (after ‘goddamn whitewashing!’) was: Horus is not Odin, you douchcanoes.

After reading the plot summary on Wikipedia, I am even more enraged. Ra is not Odin, either (nor as terrible a father; what the hell). Set is not Hades. Hathor is not Aphrodite or Persephone. Horus IS NOT THOR FROM THE MCU. Egyptian Sphinxes do not tell riddles! The Egyptian afterlife is not Hell!

I think I discovered why all but one of the main characters in this movie are white. Because someone thinks that Egypt is in the suburb of Greece where the Norse gods come to visit on holiday4.

Honestly, Egyptian mythology and cosmology is far more complex and less straightforward than Greek mythology seems from the myths most people know. And attempts to make it straightforward and just like the myths we know result in crap like this. It could be cool for some movie to attempt to translate some of that complexity to the screen. For someone to use film to show how Egyptian spiritual conceptions were quite different from the other folks in nearby regions.

This is too much to hope for, I think. Especially in light of the fact that white Americans still put tattoos of Ganesha on their bodies because that’s rad, dude, and Hinduism is a living religion.

It’s only a small consolation that this movie is going to bomb and the studio has lost massive money and the bad reviews will chase the director for a while and maybe make him cry on his pillow at night. Too bad a slew of shit reviews and the loss of money won’t be enough to stem the tide of racist whitewashing in Hollywood.

So, normally I am an RPatz fan, though not a fangirl. I think the dude is pretty sharp looking, and I love the way he makes fun of Twilight and Stephanie Meyer. But looking at the new trailer, I am sort of appalled at Bella. Perhaps because I have never seen Jacob and Edward standing together on screen, but Edward looks really fucking nasty in this new movie, and even moreso next to shiny, brown-skinned Jacob. I mean, I have have never been struck by that horrendously applied white makeup before and WTF is up with the yellow-ass eyes? How is it that people in Forks or whatever town they are in do not know that the Cullens are vampires? They look like a baker attacked them while they’re recovering from malaria. WTF.

I suppose that this should not make any sense to me because, if it did, then the books would start making sense, and one of y’all would have to kidnap me and stage an intervention or something. Still, I have seen other vampire movies that manage to make them look all sexy while pale and this is not one of them. Why didn’t she choose the brown wolf boy? Maybe Bella is racist! Or… maybe these books (and the makeup crew) just suck.

Anyone care to help me out here?

Therefore I guess I will be seeing it.  *weeps for the loss of continuity*

Anyone up for Saturday?

Like any geek worth her salt, I saw the movie this past weekend. I try not to pay too much attention to casting, spoilers, or even trailers, so I was really surprised to see will.i.am in the movie. As the sole brother, I expected him to make me proud. All I can say is that he didn’t completely embarrass himself, but being pwned by Liev Shrieber is… well… not very gansta.

I tried to enjoy the manflesh as much as possible.

My viewing companions despaired of the movie being any good because of Ryan Reynolds, but I must admit I have a lingering affection for him.  I’ve been watching him on screen since he was 13 or so and always felt happy he made good after his very, very rocky start. (He also grew up to be not-bad-looking!)

I think Cloverfield was one of the best movies I saw this year.

I don’t go to many movies.

Brilliant post today from Genevieve: 10 Fantasy Movies That Ruined It for the Rest of Us.

List includes Willow, Labyrinth, Somewhere in Time, and Excalibur, among others. Excalibur will always hold a special place in my heart, as Scott McPartland had us watch that movie when doing a lecture on Arthurian myth. It was fantastically bad, and included a scene where Merlin made it so Uther coulkd ride across the sky on a pony to reach his lady love. As it was the early 80’s, the effect is as bad as you’re imaginging it. Possibly worse.