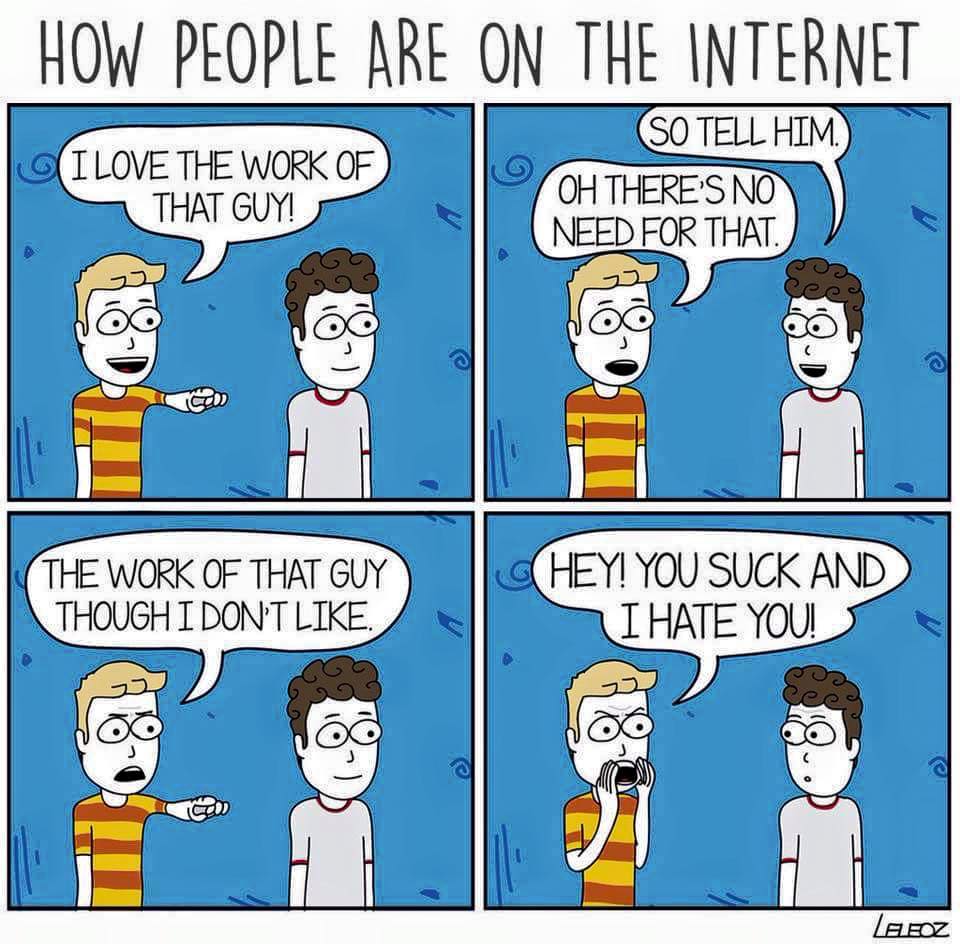 Earlier this year my friend Alethea shared the comic above on her Facebook.

Around that time I’d also seen another graphic or post or something with a similar sentiment: People don’t tell the creators of the things they love that they love said things nearly as much as they yell at creators of things they have a problem with.

I don’t completely agree. As I said in response to the first comic: Saying “I Love This!” doesn’t get the same amount of attention as saying “I don’t like this!” coupled with “because it’s a problem.” The real issue here isn’t that people don’t talk about what they love. The problem is that people don’t give attention and signal boosts to the people talking about what they love.

In the time between me first saying this and now, things haven’t changed. In thinking about the kinds of links I see shared multiple times on Facebook or Twitter, they are more of the “Do you see this awful/problematic thing?” variety than “Do you see this amazingness?” People DO post the latter stuff, but it’s not shared and boosted as many times.

This is not only the fault of All Of Us, I know. Facebook’s horrendous algorithm seems designed to suppress squee unless it comes from very specific sites (who I can only suppose are advertisers) and boost things that get us riled up. Or, if that’s not the design, then perhaps it’s just that Facebook is not here to help you spread the word about that book or that musician or that artist unless they are huge, mainstream creators with corporate backing who, again, are likely paying Facebook some money in advertising dollars.

Whatever the reasons and the back-end machinations, I do think that us individual users of these platforms have a major role in this as well. How often are you moved to share, retweet, reblog a post that’s just about someone loving on a thing they love? How often compared to boosting stuff that isn’t these things?

Don’t worry, I am not judging you cuz I do this, too. And I aim to be better about it. Thus this post.

A few months ago the aforementioned Alethea Kontis started doing a thing on her Patreon called #FriendlyFriday: “where I tell you all about my fabulous friends and what brilliant things that they are up to.” I decided to follow suit. I know so, so, so many talented creators involved in a plethora of projects that deserve more attention that I will never be at a loss for people to write about. I’m sure this is true for a bunch of the people reading this. So, I’m challenging you: join us for the #FriendlyFriday party.

Now that’s all well and good, but there’s a next step to this. When you see a post on the #FriendlyFriday tag, share it. Just do it. Unless you look at the art or book or or whatever and think “Dear Zu’ul, that is horrendous!” You don’t have to share things you don’t like. But if you do like it, even a little, share. Seek out #FriendlyFriday on Twitter or Tumblr and wherever else. If you leave it up to the social networks, they’re not going to show you. Now is the time to be proactive.

Continuing in this theme, sometimes there is art and music and dance and writing that you love that isn’t created by a friend. In that sense, the #FriendlyFriday tag might not be the best fit. I have a solution for that, too: #IHeartThisThursday.

This is for sharing links to stuff you love that you don’t have a personal connection to (other than how it speaks to you!). For my part, I plan to post something I love here in the #IHeartThisThursday category. I’ll post to Twitter and Instagram with the tag as well. You can join by making a post on your blog or tagging stuff on social media. Don’t forget to tag the creator, if possible, when you do. They want to know how much you love them as much as everyone else does.

Just as with the #FriendlyFriday tag, seek out #IHeartThisThursday posts and share them. Widely. Be proactive in boosting the good work and amazing creations that exist in the world.

We have to do both in order for this to work.

1 thought on “#FriendlyFriday and #IHeartThisThursday”