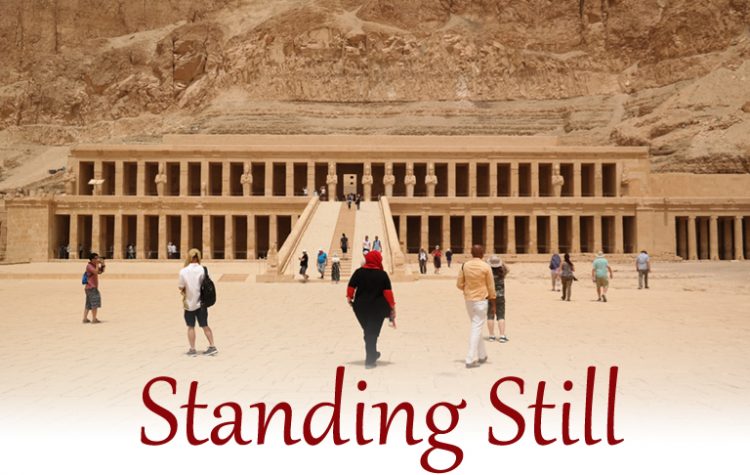 This month’s free fiction is in honor of the solstice.

In the hour before dawn a chariot climbed through the desert hills toward the Western mountains, the full moon above illuminating the way. The sky was not yet even the barest pink and every star embedded in the body of Nut winked down at the driver and passenger as they broke the night’s silence. They drove past the sealed tombs in the rock, the monuments to past kings, until the beating of the horses’ hooves echoed off the stone of the new monument ahead. Hatshepsut tapped her driver’s shoulder to indicate where they should stop, then squeezed it to keep balance once they did.

“Here, my king?” the driver asked. They were still many feet from the front of the first ramp.

“Yes, I’ll walk the rest of the way,” Hatshepsut said as she climbed down and dusted herself off. “I won’t need to return to the High House until the sun peaks, so you may return to the river to take part in the festival there.”

Even though they’d discussed this before leaving, the driver still looked uncomfortable leaving her king there all alone.

After the sound of wheels faded into the sand she walked the rest of the way to the ramp, looking up at the almost completed temple with pride. Just as Senenmut promised, the masons had completed the stonework by sunset the day before. The walls were still unfinished and undecorated, and the statues of her that would stand sentry along the third tier weren’t yet in place. But the bones of the structure were all there, and all she needed.

She walked up the first ramp, her breaths in sync with her steps, both measured and deliberate. The moonlight bounced off the polished stone of the wide courtyard, as empty and pristine as the desert beyond the oases. When the temple was done the whole of it would be filled with people dancing, singing, celebrating. For now, she enjoyed having it to herself.

Two stone falcons flanked the ramp to the third tier. She walked over to the one standing sentry on the left. Just like its twin, it faced the eastern horizon, eyes watching for the sun. Her hands slid from the crown of the head down the back to where the tailfeathers melted into the body of a snake. She walked up the ramp, fingers still trailing along, feeling rather than seeing how the carved snake tail undulated back and forth all the way up.

At the top Hatshepsut turned to face the east as well. Tendrils of dawn light had crept into the sky, erasing the dimmest stars and leaving the boldest to hang on just a while longer. Three bell strikes floated up to her from the monument beside this new one. The hamuti heralding the return of the sun after a long night. This would be the shortest day of the year, and when the Kheper pushed the sun disk above the horizon, it would rise directly in line with this ramp, this whole structure, rays reaching directly into its Heart. She stood in the direct path of those forthcoming rays, still taking measured breaths, waiting for the moment.

When Senenmut first showed her the design for this place and explained that the alignment would match that of the great Spirit House of Amun by the Nile, Hatshepsut knew she wanted to be the one to activate the stones for the first time. Her earliest memory was of standing in the Heart of the Spirit House below, hand in hand with her brother, the warmth of their father’s hands on their shoulders. When the first light touched his face, he’d sung the stone around them awake, his voice reverberating on such a deep level that Hatshepsut almost dropped to her knees at the beauty and power of it.

Tears slid down her cheeks thinking of her father, her brother, both gone now for so many years. She missed their physical presence even as she felt echoes of them in her ka.

One more heartbeat and then she saw it, the first arc of light on the horizon. She took a breath, raised her arms to the river of stars, and began to sing. At first a hum, pulled from deep within her belly, to connect to the limestone and granite around her. The floor beneath her responded with a corresponding vibration, and the columns at her back pulsed with a simple rhythm. She opened her mouth, rounding the sound and deepening it, intensifying the resonant energy just as the sun’s rays touched the third tier.

Now the structure was truly alive. It sang in harmony with her as the light spread down and across the stone. When it touched the faces of the Horus falcons a jolt of energy burst from them, winding up the sides of the ramp and raising the vibrational pitch around where she stood. Hatshepsut adjusted her tone to match–and then almost stopped singing altogether.

The sun disk, now above the horizon, seemed to split into two overlapping circles. She blinked many times, but the vision did not change. The two disks split again into four, and kept dividing and dividing, filling the horizon, filling the sky. She recognized the pattern, one of the three fundamental geometric shapes the Sisters of Seshet taught were the keys to life. The beauty of it nearly took her voice away.

Then she felt the voices of the people singing in the Spirit House by the river. Were they seeing this as well, or was it only her? She closed her eyes, the afterburn of the suns still bright behind her eyelids. She reached out with her voice and connected to Senenmut, who stood in the Heart of that Spirit House leading the dawn song. Their heartbeats synced, and then their voices, and then the mountain behind her sent a wave of energy through each tier and down down down all the way to the river.

When Hatshepsut opened her eyes again there was only one glorious sun in the pink and gold sky. Its light streamed past her and into the Heart for the first time, giving it life. Bell strikes echoed all around her marking the end of the dawn song. She released her final note, dipped to one knee, and gave silent praise and thanks to the giver of life.

Around her the stones still sang, and would sing from now until the end of days.

This story was made possible by the support of my generous patrons. Thank you!

Join us and get early access to more microfiction and other exclusive perks.

Flash fiction posted in this category by K. Tempest Bradford is licensed under Creative Commons BY-NC-SA 4.0.

This site uses Akismet to reduce spam. Learn how your comment data is processed.