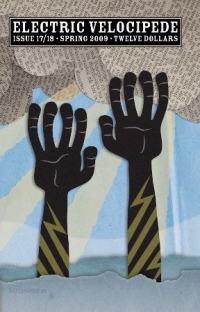 Oddly, I haven’t seen too many reviews of EV 17/18, which is a sadness! But apparently Tangent Online did a review of the entire issue, including my story Enmity. Check it:

…a cerebral exploration of the creation story, spanning ancient Greek mythology, Christianity, and probably some other sources I haven’t picked up on too.

…Now, my knowledge of classical civilisation is limited at best, so it took a great deal of Wikipedia research even vaguely to understand what was going on here. Poor Eurydice goes from creator of the world, to Adam’s Eve and back again. She dies, lives, creates and destroys, all with little idea of who or what she really is, and by the end of it all I felt just as mixed up as Eurydice herself. In that sense, Bradford did well to carry me through the narrative as well as she did, but there is no real plot to speak of. I think the ‘point’ of this piece is to portray the eternal, cyclical relationship between good and evil, and to demonstrate how it transcends theology.

My intent was less good and evil but women and men. Perhaps I tripped over my own subconscious there.

People often run up against the same issue the reviewer did when it comes to my mythpunkish stories — I pack in a lot of mythology, some recognizable by folks with a passing knowledge, some not. Apparently my target audience consists of people who have not only read a lot of mythology and folklore from various ancient civilizations but who’ve also delved into the cultural forces that shaped those mythologies and, perhaps, have also done some research into how folklore and mythology change as the socio-cultural landscape of a region or a people change.

In other words, me, Veronica Schanoes, and Helen Pilinovsky. It’s a narrow audience.

Still, I’m glad the reviewer liked it despite the confusion. Though I wonder why she objects to the line “Rape is a metaphor. And it also is not”? There’s more to the review, so click over and read the rest. And, if you haven’t read the story yet, it exists online.

2 thoughts on “A Review of My Electric Velocipede Story”