It’s that time of year again. The Con or Bust auction is on, and you can bid to win some seriously fabulous stuff ranging from awesome books to fiction critiques to swag of the highest order. All proceeds benefit the Con or Bust fund which “helps people of color/non-white people attend SFF conventions” by providing financial assistance. If you don’t know why this an important and worthy thing, ask me and i’ll explain it.

Before I get into the links to the stuff you should definitely bid on, I also want to say that if you are a person of color who really wants to attend a specific convention this year but cannot, please do request assistance. You do not have to be financially destitute to ask for or receive assistance. I bolded that because I want to make sure everyone pays attention. There are many reasons why you may not be able to attend a con (including that you are budgeting for other, less expensive for you cons) but really want to because it could be supremely beneficial for whatever reason. You are totally allowed to request money, so please do. The whole reason Con or Bust exists is so that the community benefits from your presence at cons as attendees, audience members, programming participants, and volunteers.

With that out of the way, I wish to call your attention to the following awesome auction lots that you should totally bid on! 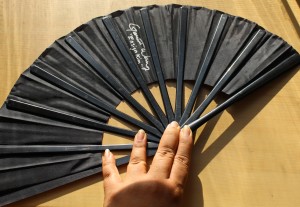 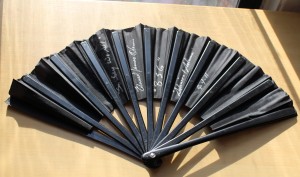 Yes, that is the type of fan I usually carry. It has the dragon design on the other side, but what you really should care about is that these fans were actually touched by Olmos and Wang. The DNA is still on them!

I also put up collections of magazine back issues that I no longer need (but are too good to just toss) that includes some very pretty issues of Weird Tales and all of the print issues of Fantasy Magazine. Check them out here.

Here are some other great auctions not submitted by me:

Years ago when the Carl Brandon Society first announced the formation of the Octavia E Butler Scholarship for Clarion and Clarion West, I got into a heated argument with a white, male friend over the need for such a thing to exist in the world. At the time, I was surprised–shocked, actually–at his vehement objection to this scholarship. It wasn’t right, wasn’t fair, excluded people like him, and was likely some reverse racism. We argued, got nowhere, and stopped talking for a while1. It was my first time engaging with a person on an issue like this, it was not my last.

Just last month I found myself in the position of explaining the need for a scholarship specifically for People of Color yet again after the announcement of the Writing Excuses/Carl Brandon Society retreat scholarship. If you scroll down to the bottom you can see my very long response to several comments, most of which boil down to:

This isn’t right, it isn’t fair, it excludes white people like me, reverse racism!

And then today I looked at the comments2 of the io9 post about the Con or Bust auction to see yet more white people complaining that such a thing exists. Giving people money to go to a con based on skin color! What about all the white people like me who can’t afford to go! I haven’t noticed a lack of diversity at the one con I go to! Reverse racism!

It makes me want to facepalm and headdesk at the same time.

Since it seems that this is going to keep happening over and over until the aliens arrive to solve all our problems or take a select few of us off to an otherworldly paradise, I wondered if it would be useful to put together a general FAQ. Instead of battling the seven-headed hydra that is the comments section on any post of this nature, why not crowdsource answers to the most common questions/complaints/ridiculous screeds? Then when someone is Wrong on the Internet, you can drop the link to it and mambo away DJ Older style.

FAQ topics could include:

Please do add any others you can think of. Suggest a FAQ topic, answer, or both in the comments. Your answer can be a condensed version of an existing blog post you wrote or found to be useful. Be sure to include a link for further reading.

Oh, and: get ready for the Con or Bust auction! There are so many awesome things!