Now that I’ve finished reading short stories for 2012, it’s time for some lists and statistics! I know, I know, lists can be boring. But not this one. I put together a list of what I consider the best short fiction of 2012. This is culled from my Favorite fiction lists I’ve been doing all year. Keep in mind that this is pretty much limited to free fiction online, so it doesn’t include stories from print mags like F&SF, Asimov’s, and the like.

If you plan on nominating works for awards, I encourage you to consider these. All are eligible for the Hugo, and some are eligible for other awards (I marked the ones I could think of below).

I’ve listed them in chronological order from most recently published backwards.

Now as to stats.

There are 19 stories on my best of list, that’s out of 82 favorite stories for 2012. I don’t have an accurate count for how many stories I read in total, sadly, but I know I read a great deal. I can’t claim to have read every story published for free online. A lot of time I stuck to the magazines I know I like the most. But toward the middle of the year I did pick up some new reading and tried to dip into new-to-me markets more often. 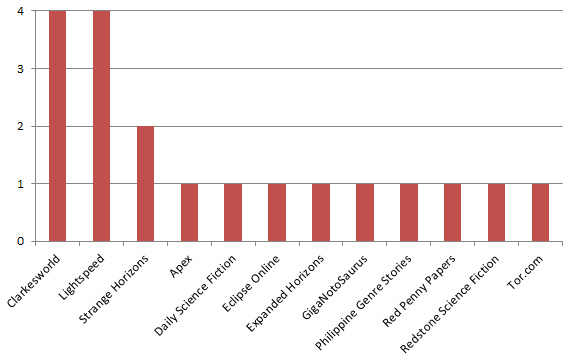 Just taking the 19 stories on my Best Of list, it’s clear that I dig Clarkesworld and Lightspeed Magazines the most, since there are 4 stories from each. Next is Strange Horizons, with two stories that made the list. (Also keep in mind that this only represents stories published in 2012 and not reprints from other years).

This pattern pretty much holds when you look at the breakdown of all magazines that made my favorites list this year.

Lightspeed is at the top (again, this is with originals) followed closely by Clarkesworld and Strange Horizons. Apex also has a good showing. After that it drops pretty dramatically. For some magazines, this is because they publish far fewer stories in a year. Eclipse Online is new, so the percentage of stories I’ve liked from the magazine is high, relatively. However, it is telling that DailySF is only on my list once. If you include the reprints I liked (9 total) then Lightspeed gets 22 thumbs up from me for the year.

I would be interested to hear from the editors of these magazines on how many stories they published in 2012 so I can get an idea of what percentage of their offerings I liked.

The SF/F split continues to be about even. 48 of the stories I liked are science fiction and 51 are fantasy. Only 4 horror stories and 3 I classed as Interstitial (with some overlap with SF/F).

Several authors show up in my favorites more than once: Aliette de Bodard, Rahul Kanakia, Ken Liu. This is partially a testament to how prolific they are, but also does represent my fondness for them. Liu in particular comes to mind whenever someone asks me about favorite authors or for suggestions on what to read. Should also mention here that I’m in Diverse Energies with both Liu and Kanakia — to be in this company makes me very happy. (I also really liked their stories.)

Overall, I’ve enjoyed reading all this short fiction in 2012. It’s definitely inspired me to write more. Plus, I like being able to see the growing expansion of the genre as I discover new gems. I will continue to read as much short fiction as possible in 2013. In fact, I’ll likely read way more.

The crew over at Not If You Were The Last Short Story On Earth asked me to join the blog, and I happily said yes. So more print mags are in my future. I also talked to AnnaLee Newitz and Charlie Jane Anders about possibly doing a short fiction roundup for io9. Hopefully that will happen this month.

You can see all of the short stories I liked this year by surfing the tag on my blog or over on Delicious. On Delicious you’ll see some more numbers that may interest you.

Welcome to 2013, everyone! Since I was so abominably late with my October favorites I decided to spend my vacation time reading and thus get you my final favorites for 2012 just as we rang in the new year. In a separate post I’ll also put up my top picks for the year. The stories that I would put in a year’s best collection were I in charge of one.

There’s a nice, long list of great stories here with some new names among them.

Yeah… so October. I realized today that the reason I’m behind on posting this list is that I just haven’t had the energy to write up a little review/summary of why I like these stories. And that continues and continues to be the case. Since we’re deep into December and I haven’t even posted November’s picks yet, I figured I would just toss the list up.

Here’s what I’ll say about them all: I liked each of these stories and loved others. If I had to pick out one that stood out, it’s Said The Princess. That one totally charmed and amused me. I think I was most surprised because Daily Science Fiction rarely publishes anything I like.

This month, the list is rather long. This explains my lateness in putting up this post (sort of… I’m also lazy!). I discovered a cache of new magazines this month, thus adding greatly to the number of stories I read and liked.

Several weeks ago I lamented about the fact that there weren’t many markets for long stories such as novellas and novelettes. As a result, people kept suggesting markets to me. I was reminded that Electric Velocipede takes longer stuff, and introduced to GigaNotoSaurus and The Red Penny Papers, which both take novelettes. I’ll put up a post later this week with a longer list.

As always, I welcome any discussion of these stories in the comments. let me know if you liked them or not and why an feel free to tell me I’m wrong and have bad taste! Also, consider dropping a comment where the option is available on the original stories.

As I predicted, this is way late thanks to WorldCon. All things can be blamed on WorldCon. The good thing about going was being at the Hugo ceremony to see many deserving writers and artists get their shiny rockets. It’s sort of a coincidence (but not exactly) that many of the Hugo Award winners also have fiction on my list below. A coincidence because I didn’t plan it that way, but not because it’s no surprise that I’d love their stories given their track record.

Last month I also did some novel reading. I finally finished Liar by Justine Larbalestier. If you haven’t read it yet, go now! It’s so good. I also read the last of the Midnighters books by Scott Westerfeld. I put it off a long time because I love the first two so much I didn’t want to be done with those characters.

September is already shaping up to be a great month, especially since there’s a new issue of Electric Velocipede out. Also, did you know they have a Kickstarter? They so do.

Sorry I’m so late in posting July’s picks, all. Got caught up in work stuff, as usual. I’m also behind on my August reading. And with Worldcon coming up in a couple of weeks I might be late with my picks after that.

Speaking of WorldCon, one of the reasons I started these lists and keeping track of the stuff I read that I like is that I’m trying to be better about suggesting fiction for awards. Not just the Hugos, but also the Tiptree, Carl Brandon, World Fantasy and Million Writers Awards, to name a few. Remembering favorite short stories is harder for me than remembering favorite novels. Now I have all of the stuff I like cataloged over on Delicious with tags that will help me find appropriate stuff easier.

If anyone would like to join me in tagging and keeping up with loved stuff in this manner, my username on Delicious is ktempest.

And now, the fiction:

June was a really good month for fiction! Must be all that summer reading we’re all expected to do. I didn’t get very far in my novel reading this month, but I did start on The Shadowed Sun by N. K. Jemisin, Redshirts by John Scalzi, and continue working through Throne of the Crescent Moon by Saladin Ahmed. I also picked up Ancient, Ancient  by Kiini Ibura Salaam.

I came home from WisCon 36 with a big to-read pile (though these days it’s less of a pile and more of a list on my Nook) and so June’s favorite fiction list may include less short stories and more novels. Also, I don’t think I scooped every new May story into Readability, so I’ll probably a have few more published last month in the next list.

One last thing — I notice that Rahul Kanakia keeps popping up everywhere and I must say I’m super pleased about that. I’ve liked everything I’ve read by him so far. If he’s as prolific as he seems, I will have plenty to catch up on over the next few months.

Lately I’ve been making an effort to read more short fiction since I’ve been on an almost exclusively novel diet for a couple of years. But now that online magazines are making it easy for me to read them on my eReader or phone or tablet, I will do my bit by actually reading them.

Last month I started in earnest, so here’s a list of the stories I read and loved in April.

Also of note: just finished N. K. Jemisin’s The Killing Moon and it’s amazingly good. You’ll love it if you liked her Inheritance trilogy. I also got hooked into E. C. Myers Fair Coin even though I already read that book long ago. Yet somehow it completely sucked me in. I guess this is why io9 called it pure, awesome crack ;)