Fans of NPR’s Weekend Edition may have caught a familiar voice when listening to the segment on time travel fiction. I had a great time talking to Petra Mayer about time travel, a topic near and dear to my heart. Yes, I am still writing a novel with time traveling twins (same world as my story in Diverse Energies). Now that all of NPR knows about it I guess I should finally finish.

In the mean time you can enjoy my best-loved time travel books, stories, and other media!

I mentioned this during the time travel panel at ReaderCon. In this story, a future society has invented time travel and they use it to go to parallel worlds, travel back in time, get famous people from the past, then bring them forward in time back to their own timeline. Thus avoiding changing their future. I swear this makes sense. The story centers around one guy’s attempt to convince Orson Wells to come to the future. 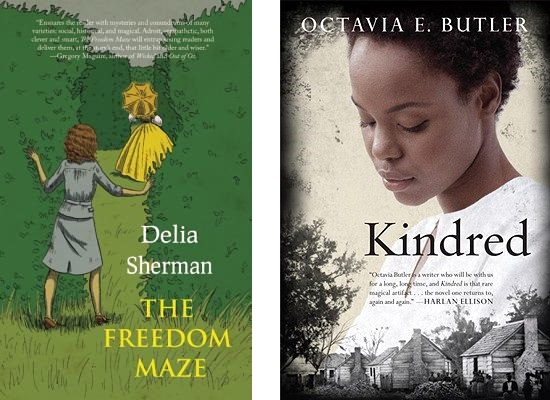 The Freedom Maze by Delia Sherman and Kindred by Octavia Butler

I mention these two together because they share a basic premise (but are very different in sensibility as well as plot). In both, a person from modern times is thrown back into the era of American slavery, ends up with people who are her ancestors, and has to live as a slave for some portion of time. In Kindred the person is a grown woman who is pulled backward in time multiple times. In The Freedom Maze the person is a young girl who is actually white, but because she’s very tan is mistaken for a mulatto. She stays in the past for weeks and it’s unclear whether she’ll ever get back home. Both novels explore modern perspectives on the past in interesting ways.

Some people will try to tell you that the best Star Trek episode about time travel is “The City on the Edge of Forever”. I don’t mind telling you that those people are wrong. As with so many things Star Trek, DS9 has the best episodes using this story vehicle. My ultimate favorite is, of course, the tribble one where the crew of DS9 travel back to the episode “The Trouble With Tribbles” and have to blend in with the original Enterprise crew. It’s awesome on so many levels from how seamlessly the effects crew blended the footage from TOS with the new footage to moments like this:

However, “Past Tense” has stayed with me all these years for a different reason. DS9 was often very social justice oriented, and this episode was chock full of it. For once, when Star Trek people ended up in the past on Earth it was not in the 20th century. Instead, they land in 2024 (still in San Francisco, though) in a dystopian America that is sadly not that hard to imagine. People who are poor, sick, or just undesirable are cordoned off into ghettos. And not just ghettos in the urban sense, but actual ghettos with walls and fences and an inability to get out where people have to fight over food rations and only get a place to sleep if the local gangs think you’re okay. It’s terrifying and not that far off the mark. This episode aired about 20 years ago. 2024 is 10 years from now. Think Star Trek will prove prescient?

This series didn’t get a chance to flourish fully and it ends on what could be a cliffhanger or what could seem like a satisfying end given that we sort of know what happens after. The second season dragged in the middle for sure, but overall this is one of the best entries in the Terminator franchise, right up there with T2 and way better than T3 or what weird one with Christian Bale.

The main characters in SCC don’t do much time traveling themselves. What I loved about the time travel elements is that the war between Skynet and the humans takes place not only in the future but across both the relative past, the future, and the present. Several people and Terminator models are sent back in time at different points for specific and long term missions. And each time a person or group of people are sent back, it changes the future. So that woman you knew in the resistance and see again on the street might not be the exact person you knew, but a version of them.

And even when they strike a blow against Skynet, be it by destroying tech that will lead to it or getting rid of a Terminator come to kill someone, it doesn’t necessarily mean Skynet won’t still rise, it’ll just rise at a different date. All these elements are key to the plot, and kudos to the show for making all of this relatively straightforward and understandable. It’s not just some jumbled timey-wimey mess.

I am always looking for more time travel fiction to add to my to-read pile. Rec me some in the comments, if you would!