The other weekend ReaderCon happened and, on the whole, I had a great time. I am sad I had to leave early to go to a wedding in the city, but that’s way better than missing everything. ReaderCon is usually a good time, even as much as we snark about multiple references to Proust.

There were a couple of things that marred my enjoyment of the con and I’d been trying all last week to write about them. Instead of trying to temper my anger and aim for tact, I’m just going to be blunt.

The fact that none of Andrea Hairston’s books were in the dealer’s room is bullshit of the highest order. Andrea was a Guest of Honor. You don’t fucking NOT stock the book of a guest of honor at a con where you are a book vendor. How is this not con vending 101? 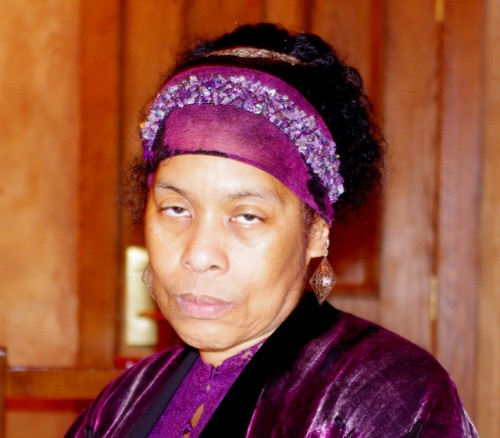 The ReaderCon dealer’s room is called The Bookshop for a reason: almost 100% of the stuff for sale is there are books. Every now and then there might be a T-shirt vendor or maybe a flash of jewelry. But it’s ReaderCon, so it’s all about the books. This makes sense.

Some of the booksellers are publishers who are pushing their own books and maybe the occasional extras by smaller presses who can’t afford a table. Those dealers not carrying Andrea’s books makes sense–they are not her publisher.

Some of the booksellers deal in used books or rare books. They also have some excuse for not selling Andrea’s books.

But to the several vendors who sold current, regular books? You all need to have your asses kicked.

Throughout the con attendees asked these sellers if they had any of Andrea’s books. I know for a fact that one of them, Larry Smith Booksellers, told people that her books are out of print. Which is a lie. When I asked, a guy I can only assume was Larry Smith himself yelled this at me. He was angry–really angry–that I had dared to ask him about this and proclaimed loudly that he only sells new books. Meanwhile, Andrea’s most recent book came out weeks ago. Guess that’s not new enough for him.

As an aside, the selection of books on offer by Larry Smith and the other general book vendors is hardly any better than what I can find in the Barnes & Noble. So what value are they adding to ReaderCon, exactly?

If you can’t be bothered to order the books of a guest of honor at the con and you’re rude as hell to con attendees? You shouldn’t get to vend at ReaderCon. And I’m filing a report with the con chair to that effect this week.

In addition to that indignity, the newest issue of Locus contains this:

That’s from their article on WisCon. There’s a picture of Andrea (with correct attribution) to the right of these words. So it’s a real mystery why the 2011 Tiptree award winner is identified as Alaya Dawn Johnson, who has not won any Tiptree nor was she at the con at all. Seriously, not at all.

Ever since I started going to cons I’ve joked about how (mostly) white folks can’t tell the POC at the con apart from each other. I don’t even mean just mistaking one black person for another black person or one Asian person from another. I mean mistaking an Asian-American for a Latino dude (this happened at WisCon).

This happens all the time. ReaderCon was no exception. I watched a guy come up to John Chu at the Meet The Pro(se) party and ask him to sign the issue of F&SF with Ken Liu’s The Glass Menagerie. John was very polite when he said “I’m not Ken Liu.” That was, apparently, only one of the times that people mistook him for Ken Liu at ReaderCon this year. I heard that someone congratulated Sofia Samatar on being the guest of honor. I heard that someone started up a conversation with Mikki Kendall and then continued that conversation with a different black woman later on, not realizing that the shorter, lighter woman looked absolutely nothing like Mikki.

Here’s the thing: at cons, we are all wearing name badges. Thus, it is not at all shameful for you to look at said badge to confirm that you are, indeed, addressing the person of color you think you are. Especially if you have not ever met said person of color. It’s okay. But assuming that the Asian man standing in the room must be the Asian man you’ve heard of and asking him to sign a thing? No, people. No.

Over the years I’ve often joked about this. In fact, in my introduction of N. K. Jemisin at WisCon I referenced this phenomenon for the purpose of making folks laugh. I do sometimes find it funny.

Very often I do not. Because this is a form of erasure. It’s a microaggression with a subtext that says: I do not care to figure out the difference between one non-white person and another. And it makes us feel like you don’t eve think of us as people, but interchangeable entities.

And it needs to end.

Stop erasing our humanity by assuming that any brown person might be any other. Learn how to tell non-white people apart. Check name badges. If in doubt, ask us: “What’s your name, again? I’m good with faces but not names.” Don’t ask us: “Are you [other person]?” Stop erasing our accomplishments by assigning them to other people. Check your facts. And for the love of Seshet, stock our books in the damn dealer’s room!

32 thoughts on “Erasure Comes In Many Forms – A ReaderCon Report”

Ruby Finley vs. the Interstellar Invasion

Subscribe to my weekly newsletter Tempest in a Teapot for community, fireside chats, news, updates, and (of course) tea.

Join the Tempestuous Salon to become one of my monthly supporters and get exclusive peeks into my creative process, monthly microfiction, and more.

Need to rekindle your creative spark? Reconnect with your muse? Generate some new ideas? Get back to creating after things got to be too much? The 33 Days of Inspiration series is for you!

Want to explore low-key writing games and exercises without the pressure of producing something you have to share or sell? You are cordially invited to join the Fun and (Writing) Games Salon!

A podcast exploring the roots of creative genius.

A podcast exploring the analog and digital tools writers use to write.

I Challenge You to Stop Reading White, Straight, Cis Male Authors for One Year