Interested in reprinting any of my works or want to publish a story in translation? Great! Contact me here with the details.

In the darkness before dawn on the equinox, Khemetans who came from across the delta and White Fortress region gathered around the base of the Great Lioness. Their voices quiet, reverent; their bodies newly wet with water from the still anemic Nile; they sat with eyes trained on the eastern horizon. Like the giant stone Lion of the Horizon, their faces would greet the dawn directly on the day marking the beginning of the harvest season. Most of them tried not to think about how poor that harvest would be this year, just as last year, and possibly all the years to come. Instead, they waited for the life-giving rays of the sun to warm their skin and remind them of the first eternal truth: Everything changes, but the dawn always comes.

Half a shade after the sun disk pushed fully over the horizon, the Lioness seemed, impossibly, to shudder. Sounds emerged from under the ground that ricocheted around the still quiet crowd–vibrations that didn’t make sense.

They had begun to murmur when the copper scarab emerged from the sand between the stone paws, hissing and clicking and gleaming in the sunlight. The people’s silence held for one breath, two, before everyone reacted at once. Amatashteret watched from a short distance as some scrambled away in fear, some fell to their knees in shock or in reverence, and some ran to get a closer look.

Buy In the Shadow of the Towers

I found myself… intrigued by the tantalizing hints of a cool alternate world in the background… The story is only two thousand words long, and that sketched background [is] what gripped me.
–Locus

in In the Shadow of the Towers: Speculative Stories of a Post 9/11 World, ed. Douglas Lain and Strange Horizons

In the ten years since Red Seteshday, the clerics have perfected the haitai ritual to the point where participants know the script by heart and no longer need much direction on where to go and when. Still, Sadana manages a rotating roster of family members and survivors, reminding them of the correct verses to chant while invoking the highlights of that tragic day. Every year she stands on the memorial dais at the center of the concourse marking the time for prayers and the time for reading the names of the dead. 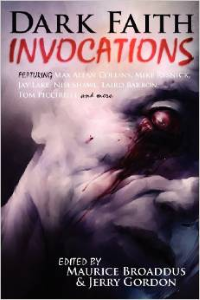 There’s a lot going on in this story… it holds together well and is a compelling read.
—A Story A Day

The Birth of Pegasus

Perseus cannot sleep again. He sits awake in the night, listening for the sound of hooves, looking for her mane in the moonlight. She haunts him, hunts him in dreams, has haunted him since spring.

The high point of the anthology… —Book Banter

The world always changed around Iliana, but she never changed with it. She could always feel this when it happened: a roaring, rushing sound filled her ears, invisible tendrils gripped her chest and heart. It never lasted more than a second. So fleeting she could dismiss it except for the consequences. Because when the sound faded and the pain eased, the world around her had changed, even if she didn’t know how.

This went on all her life, as far as she could tell. Even before she knew what it meant. Looking back, she recognized moments she’d dismissed or misunderstood. Like the time her mother’s hair went from long to short right in front of her yet no one else noticed. Or the day her school’s name changed from King to Bond Hill Elementary, and no one remembered it any differently.

But there was no mistaking what happened on the night of her seventh birthday.

I did enjoy the complexity of the narrative, and I found the synthesis of so many different stories very stimulating to follow.
—Tangent Online

…the serpent visited every village, town, country, continent that she had once walked upon, bringing her son upon her again and again.

Read or Listen To Elan Vital

The execution is superb…
Tom Crosshill

…the best story in the issue… This is one you won’t forget soon.
—SFRevu

The few minutes I had to spend in the Institute’s waiting room were my least favorite part of coming up to visit my mother. It felt more like a dialysis room, the visitors sunk into the overly-soft couches and not speaking, just drinking orange juice and recovering. There were no magazines and no television, just cold air blowing from the vents and generic music flowing with it. I’d finished my juice and was beginning to brood on my dislike for overly air-conditioned buildings when my mother arrived attended by a nurse.

I kissed and hugged her, automatically asking how she was, mouthing the answer she always gave as she gave it again.

…a few delightfully snarky stories which deconstruct, and in some cases satirize outright, the idea of a civilization made up of civilizations, and these are among the book’s standout stories.
—io9

…the most frank treatment of the “alien civilizations are likely not homogenous” I’ve seen or read…
—Tor.com

I didn’t pay much attention to the aliens at first. Oh, if you mean like that first week, then yeah, we were scared and hiding and shit like everyone else. But once the whole thing calmed down and everything went back to normal I didn’t spend that much time thinking about them. 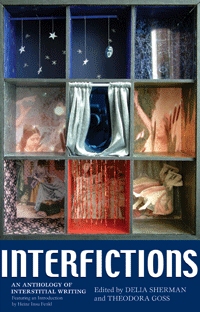 …the clever narrative of this particular tale dips you in and out of “dream” and “real life” like an elegant dance.
AS if!

…the story is a river: it fetches you in with intriguing shallows, soft eddies of water, refracting light as it swirls over half-obscured and winking stones.
—Phoenix Girl Walking

This could be fantasy, it could be magical realism, or it could just be literary fiction. Frankly, it’s all of the three, and yet none too.
—Calico Reaction

in Interfictions, eds. Delia Sherman and Theodora Goss and PodCastle ep. 123 and Happily Ever After, ed. John Klima

Then, on the twelfth day of the twelfth month, the dreams changed.  They ended with a crash and fire and the feeling of falling.  Most nights she almost didn’t wake up in time.

Exactly one year from the night the dreams began, Brenna struggled out  of sleep, the phantom smell of burning metal still in her nose.  She reached out for Scott–he was not there.  He was never there.  He had never been there.  She fell back onto her pillows and groaned. Another dream of flying, another reaching out for Scott; she wished she could stop doing both.

…a story that could very well have been taken from the pages of an episode of The Twilight Zone.
—Dread Central

in Thou Shalt Not… ed. Lee Allen Howard

Clia stood before the large, oval mirror in her room and stared at the reflection. Bone-straight hair–long, shiny and black–a heart-shaped face, perfect button nose, sensual mouth, and wide green eyes. The skin held no blemish and no imperfection–not too dark, but not too light. An elegant neck; firm, round breasts; smooth, flat stomach; curvy hips; long, muscular legs tapering toward the floor and ending at the bottom of the mirror.

“Yes, this is what I want,” Clia said. Her mouth moved. The reflection’s did not.

in Farthing Magazine issue 3 and PodCastle

It all started because I wanted a pet. All of us younger kids did. But Mom always said that there wasn’t room for any pets cuz there were so many kids. She had a point, I guess. There were nine of us. But then David, my oldest brother, left home when he was only seventeen and a half to join the Peace Corps. Mom cried for three days straight. Dad said it was only because she was going through the Change of Life.

The day after she stopped crying there was a bunny in the living room. No cage, just a bunny. I guess Dad bought him hoping it would cheer Mom up–and it did. She sat on the couch holding the bunny for hours and told us all that we had a new family member: David the bunny.

If you are anything like me (and I bet that you are) you have certain expectations in life. Like an expectation that if something is falling out of the sky it will be rain, or maybe snow, a leaf, or possibly an apple…

in The Cafe Irreal issue 8 and PodCastle

You keep saying it, first in your mind, then aloud. Over and over. A mantra.

Why I Don’t Drink Anymore

in Abyss & Apex (read it here)

I’m sitting at my favorite café drinking absinthe when this guy comes up to me.

You’re a writer, aren’t you? he says.

Yeah, I says. How did you know?

You have that Hemingway thing going on, he says. Sitting around in a café all day. Drinking absinthe. Scribbling in your little notebook.

What We Make of It