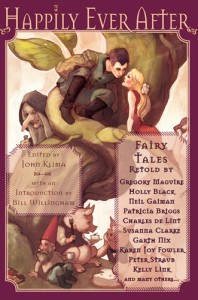 Many moons ago the awesome John Klima emailed and asked if I had any fairy tale retellings since he was putting together an anthology of such things. I sent him Black Feather (my Interfictions story), he accepted, I made a happy face. Life is good. Yesterday, for the first time, I saw who else is also in this anthology from a post on SFSignal. People, I had No Idea. I sporfled so hard on the subway train New Yorkers gave me the side eye.

Just look here and sporfle with me, won’t you?

Susanna Clarke, Kelly Link, Jeff Vandermeer, Genevieve Valentine, Holly Black, Neil Gaiman, the list of awesome just keeps getting longer and longer! Nancy Kress was my first Clarion West instructor and now I am in an anthology with her. What.

But the most exciting bit is this. No anthology of this kind would be complete without Theodora Goss, that goes without saying. But the story in here, “The Rose in Twelve Petals,” is one of my favorite stories of All Time1. One of the first that ever moved me to track down an author’s website and email her2. That one of my stories gets to be in the same book as that is a most excellent way to begin my next year of life.

The book is out in June, and you can pre-order it from Nightshade or Amazon or Barnes & Noble or likely your local bookshop.

P.S. I would also like to point out that, once again, I’m in a book with a gorgeous cover.

6 thoughts on “Best Birthday Present EVAR: Happily Ever After TOC”